Have you seen images with text written in a foreign language? Did you ever wish to know what they say? You need OCR & translator tools. Here are the best ones.

Picture this: you are on a vacation or business trip in another country for a few days. You can't understand most of the labels you see because they are written in a language you can't read. It sounds like a nightmare. Thankfully, you can use some digital tools - specifically ones that translate image text - to understand them. Here, we will talk about the best software that lets you translate an image into text. 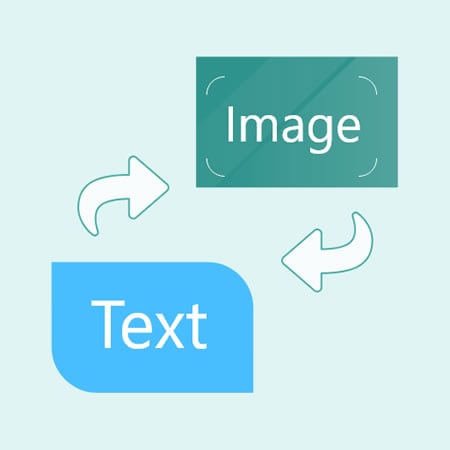 Here are the Android/iOS tools you can use to translate text on images.

Almost everyone now has heard of Google Translate. It is a program developed by Google which allows people to translate documents, text, and even websites from one language to another.

Live Translation - just put the text on camera view; no need to take an actual shot.

Does not allow you to copy the text.

Step 1 Go to Play Store or App Store to install the Google Translate app on your Android phone or iPhone/iPad. The web version does not have the OCR function.

Step 3 Tap the button before the right arrow symbol, then select Detect Language or choose the right language if you know what it is.

Step 5 You will see a camera icon at the bottom right of the screen. Tap that. Permit Google Translate to access your device's camera.

Step 6 Put the text into view, tap Scan, and then tap the circle at the bottom center.

Step 7 Put your finger on a scanned word to see the translation.

User Reviews: Jaymar Cabebe of CNET tested Google Translate's OCR shortly after its launch. He said he was able to translate several lines of text. He used different font styles and sizes to test the limit of the app. Google Translate passed the exam with flying colors.

Yandex Translate is a language translation app developed by Russians. Therefore, it is very reliable when translating from English to Russian/Turkish and vice versa. However, it is somewhat inaccurate when translating other languages.

A little inaccurate when translating other languages besides Turkish and Russian

Step 3 Tap the camera icon at the bottom center of the screen.

Step 4 If you are taking a new image, put the text in focus, then tap the camera icon to take the picture. On the other hand, tap the image icon at the bottom right if you want to use an image saved in your gallery.

Step 5 Wait for the processing to finish, and you are done.

User Reviews: Google Play reviews about Yandex are a mix between "Ok" and "Amazing!" People love how reliable this free application is. A user also adds that it is the only free app they found that supports offline voice translation.

How to Translate Photo to Text Online

HiPDF is an online service offering many PDF tools. Admittedly, HiPDF can't translate text from images. However, it can be a picture-to-word translator. You can then translate the text using other tools.

The image-to-text translation feature is only available to subscribers.

Price: A HiPDF subscription costs $5.99 monthly. It unlocks the OCR feature. Furthermore, it removes the usage limit and raises the maximum file size to 100 MB and the maximum number of pages per file to 200.

Languages: HiPDF's OCR supports 23 languages, including Korean, Italian, French, Portuguese, and many others

Step 3 Click choose files, then select the image containing the text you want to translate.

Step 4 Click OCR Settings, then select the language of the text in the image. Also, select your desired output format. 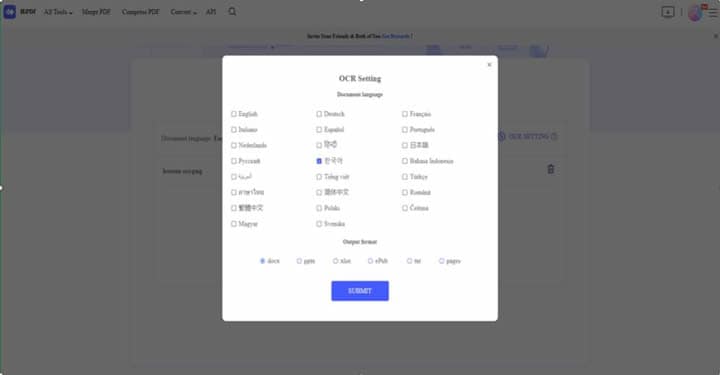 Step 6 Click Convert to convert the image into text.

Step 7 Download the converted file, then copy the text. Use another tool like the web version of Google Translate to get the translator.

User Reviews: The community loves HiPDF because of its many features besides text-to-image conversion. G2 reviewers praised how fast and safe converting files on HiPDF is.

How To Translate Image Text on PC

The first thing that comes to mind when talking about translation tools is Google Translate. However, Google Translate's OCR is exclusive to its mobile apps. The web version does not have that functionality. And even if it does, Google Translate is strictly for translations. You can't use it to edit the scanned text. Therefore, it's better to use another program.

Wondershare PDFelement has an OCR tool that allows you to convert images into editable text. Then, it allows you to translate the words into another language.

Step 4 Locate the image containing the text you want to translate. Click Open.

Step 7 Select the pages you want to translate. (Optional)

Step 8 Set the languages the words in the image were written in under "Languages Recognition." 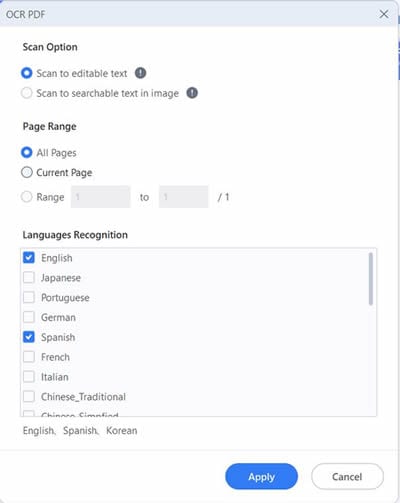 Step 10 Highlight the words you want to translate, then click Translate at the floating bar that would pop up.

User Reviews: Jaymar Cabebe of CNET tested Google Translate's OCR shortly after its launch. He said he was able to translate several lines of text. He used different font styles and sizes to test the limit of the app. Google Translate passed the exam with flying colors.

What Else Can I Do With This PDF Tool?

Wondershare PDFelement - PDF Editor is an ever-reliable document tool. It allows you to do more than make or edit PDFs. Thus, so many users consider PDFelement the best one in the market. Here, let's review some of its helpful features:

There are plenty of tools you can choose from when translating image text. And if you need to convert an image to text first, HiPDF is one of your best options. PDFelement is an even better choice. It allows you to convert images into editable text, then translate the text to another language. With these tools in your pocket, you can easily understand things not written in your native language.