The 5 Fastest and Most Accurate Mobile OCR Apps

What is an OCR application? It is an app that lets you scan and extract text from images. Students and professionals alike find them handy. Travelers could use them, too, especially mobile OCR apps. They can use the apps to scan text they see on the street and translate them. So, it's nice to have an OCR tool installed on your mobile device. Learn about your best options below. 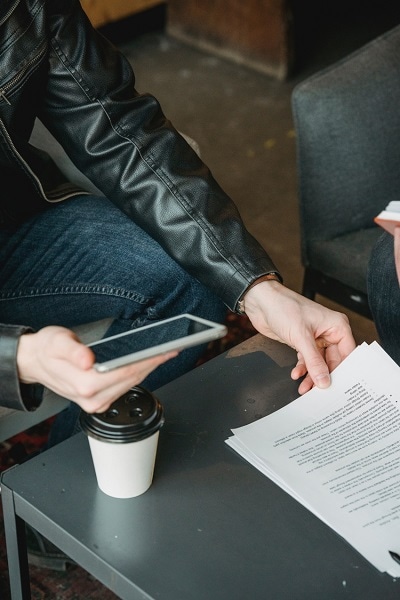 Benefits of Having an OCR App in Your Pocket

Suppose there is a printed document in front of you. You need to encode its content into a document. However, you only have a little time, so typing the content yourself is out of the question. You can use a mobile OCR app to scan the text. You don't need to transfer the scanned image to make it editable. The mobile OCR app lets you do that, speeding up the process.

As mentioned above, you can also use the mobile OCR app while traveling. You can use it to translate street signs and other labels you might find.

Are you on a tight budget? Don't worry. You don't need to spend money to have an OCR tool on your smartphone. Some of the best options are free! Here are the 3 best free OCR apps. 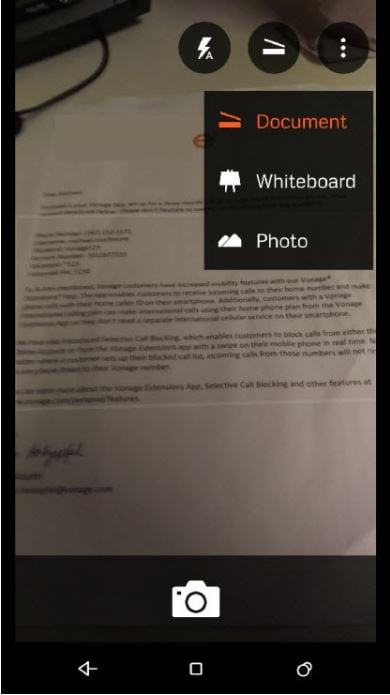 Office Lens is an OCR app from Microsoft, a well-known tech company. It lets you scan written materials like printed documents, business cards, whiteboards, and notepads. Then, the app extracts the text and makes it editable. Unsurprisingly, this app is very reliable despite lacking a price tag.

Office Lens does what it is supposed to do. One thing about it that's so likable is that its system requirement is not high. Office Lens can run on devices running on Android 4.1 or later versions of Android.

This app has lots of handy features, too. For instance, it automatically deskews text from images shot at awkward angles. Also, Office Lens allows you to save the extracted text as a PDF, Word, or Powerpoint. You can also directly upload it to OneNote or OneDrive.

Office Lens' whiteboard mode is among its best features. It cleans up the images, making them look more pleasing and presentable. Also, it straightens distortions caused by shooting at an angle.

Does not work on curved surfaces

A reviewer in Google Play Store said that Office Lens is "one of the best scanners out there." They liked how this app always produces a clear picture. Thanks to Office Lens' features, their productivity has improved. 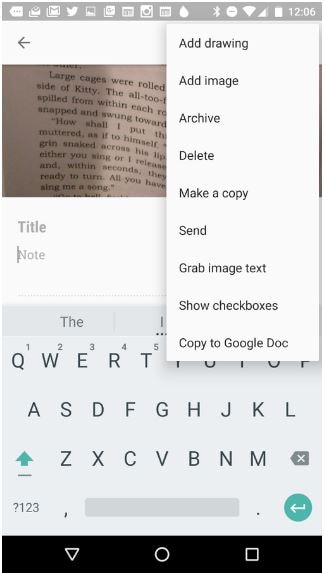 Google Keep is yet another OCR tool from a megacorporation. It is a note-taking program with built-in OCR that allows you to make notes using scanned images. Of course, you can use its OCR feature for other purposes.

Google Keep lets you hit two birds with one stone. You get a note app that lots of people love. On top of that, you get an OCR tool. The best thing is that you get these for free!

Google's OCR tool is a proven tool. It provides accurate results, so minimal correction is needed after extracting. Additionally, it supports so many languages. You don't even need to set what language is used in the text. Google Keep's OCR auto-detects it. Indeed, it's an OCR app you can count on.

Text extraction is a little slow.

Jack Wallen from TechRepublic wrote a tutorial on how to use Google Keep's OCR feature. He claims to have tested the feature on a number of sources. His verdict is that Google Keep is an amazing OCR app because it extracts text correctly. It even worked with long paragraphs.

Text Scanner [OCR] is one of the most reliable mobile OCR apps. It’s an app that’s easy to use, and it delivers accurate results. But keep this thing in mind: Text Scanner is not forever free. You can only use this OCR app 15 times before you have to pay to access the tool again. A workaround we found is uninstalling and reinstalling the app. Unfortunately, that does not remove the other problem. Text Scanner plays an ad after each use of the free version.

Text Scanner has an impressive text extraction speed. It is almost instant! Also, this app is very easy to use. Point the camera to text, take a photo, and scan. Then, you'll have the extracted text ready for editing or copying.

Text Scanner supports over 50 languages. Like Google Keep, you don't need to specify the language used to write the text. Text Scanner automatically detects it.

You can only use the free version 15 times

An ad plays after each use of the free version

A user said on Google Play Store that Text Scanner is a "game changer." They love its speed and accuracy so much that they decided to get the premium version.

Most Powerful OCR Apps for Android and iOS 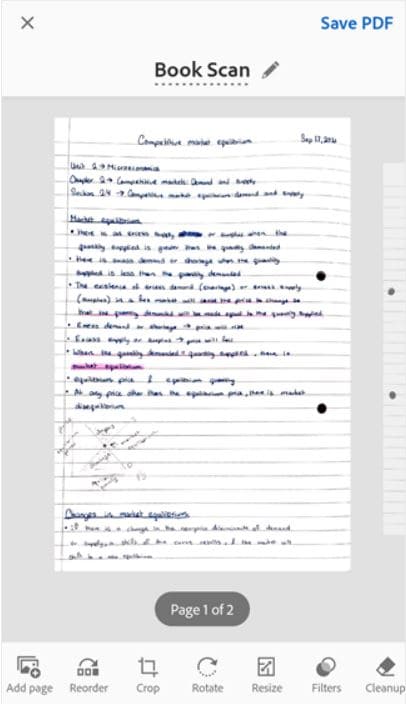 Adobe Scan is Adobe's mobile OCR app. It lets you scan text from images and save it as a PDF. Unfortunately, you cannot edit the extracted text using this tool. You need an Adobe subscription or another app to do the editing. Nevertheless, Adobe Scan is one of the top OCR apps for mobile.

Adobe Scan has multiple modes optimized to scan different document types. One's for whiteboards, the other for ID cards, and another for books.

It automatically converts the text in the image to editable text. The OCR technology ensures that the text is readable and in focus. Then, it allows you to save the file as a PDF.

Does not have an editing function

The interface could be clearer for beginners

A user said on Google Play Store that Adobe Scan has let them make a crumpled document look good. That is thanks to Adobe Scan's OCR tool. They described it as a step up from Google Docs regarding document manipulation.

PDFelement for iOS has received a big update. It now has the robust OCR tool that its desktop counterpart has. Therefore, aside from editing and annotating PDFs, PDFelement now allows you to extract text from scanned images with your iPhone/iPad.

The OCR tool unlocks more capabilities for this app. You can now make scanned PDFs editable without relying on another app or PDFelement on your computer. As with the desktop version, it provides accurate results. As icing on the cake, there is basically no waiting time. Extracting text from images with great accuracy does not take too long.

OCR is locked behind a paywall.

A reviewer on the Apple App Store said they had been using PDFelement for a long time. They said they couldn't imagine not having it. That's a testament to how helpful this app is. With the new OCR feature, its usefulness will skyrocket to even greater heights.

How To Choose the Image-to-Text App for You

As always, the answer is: "It depends on your needs." Choose one that recognizes your language. Also, most apps double as another tool. PDFelement is a PDF tool, while Google Keep is a note app. You can use that to identify which OCR app is the best for you.

You can choose from the free OCR apps if you are on a budget. But note that PDFelement is currently the best OCR app right now. It's the most powerful of all the options. Additionally, it has other uses aside from converting images to text. There you go. These are the best OCR apps for mobile.

How to Organize PDF Pages in iPhone 13

How to Use Passwords to Make PDF Files More Secure

How to Print PDF on iOS/iPad Easily

How to Optimize with PDFelement Easily

The Best Way to Flatten PDF Files on iOS

The Best PDF Annotator on iOS of 2022