English to Malayalam translation PDF tools are essential in today's world of rapid globalization. Documents that are exclusively in English are not accessible to those who only speak Malayalam, and not all texts are pre-translated because they're simply not that essential. But what if an important PDF English to Malayalam translation needs to be done urgently and you don't have the budget to hire a live translator? As you know, free tools like Google Translate are certainly available, but the accuracy is often inadequate. So, what's the answer? That's what this article covers. Let's begin with the basics.

Why People Search for English to Malayalam Translation for PDF?

Malayalam is a language from the Dravidian family of languages. It is primarily spoken by about 34 million Malayalis in Kerala and other states and union territories (like Puducherry and Lakshadweep) in India, as well as the vast Malayalam-speaking diaspora around the world. As such, it is an important language from a global perspective.

Unfortunately, since much of the world's popular text is written solely in English and other major global languages, and not all Malayalis speak English, it is sometimes necessary to do English PDF to Malayalam translation for the sake of accessibility. Academic text, classic literature, professional documents, etc. may fall under this category and may require English to Malayalam translation PDF tools or methods. 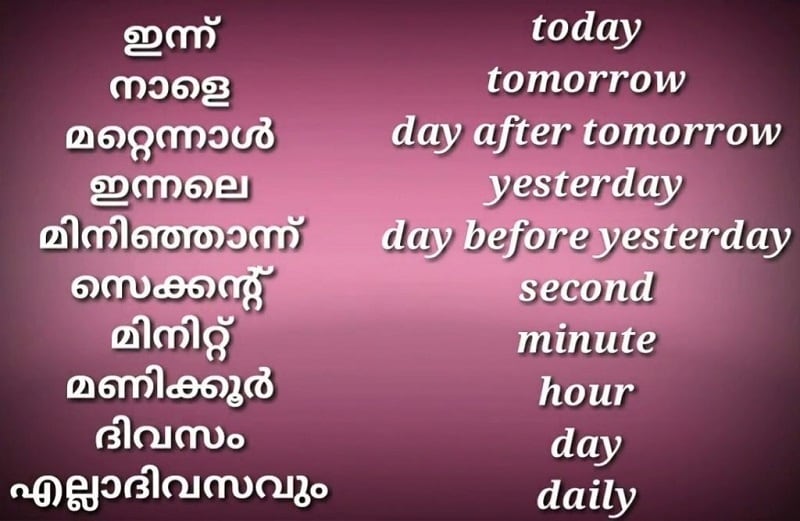 The problem with PDF, however, is that it is a static file format, which makes editing for translation quite challenging. Of course, you can copy the entire text or parts of it and paste it into a more editable file type such as Word and then translate it, but you can also leverage the power of automatic PDF translation tools such as PDFelement, which brings us to the main part of this article.

Tool #0: Directly Translate English to Malayalam or Any Other Languages on PDF with PDFelement

The latest version of Wondershare PDFelement - PDF Editor comes with a built-in translation tool that supports English to Malayalam PDF translation as well as a host of other language combinations. PDFelement is an all-in-one solution for handling PDF document workflows, but specific tools such as the translator makes it even more handy for purpose-oriented tasks. Using this instead of other methods and tools (outlined in subsequent sections of this article) makes you more efficient at handling translation tasks in general and English PDF to Malayalam translation work as a specific example. 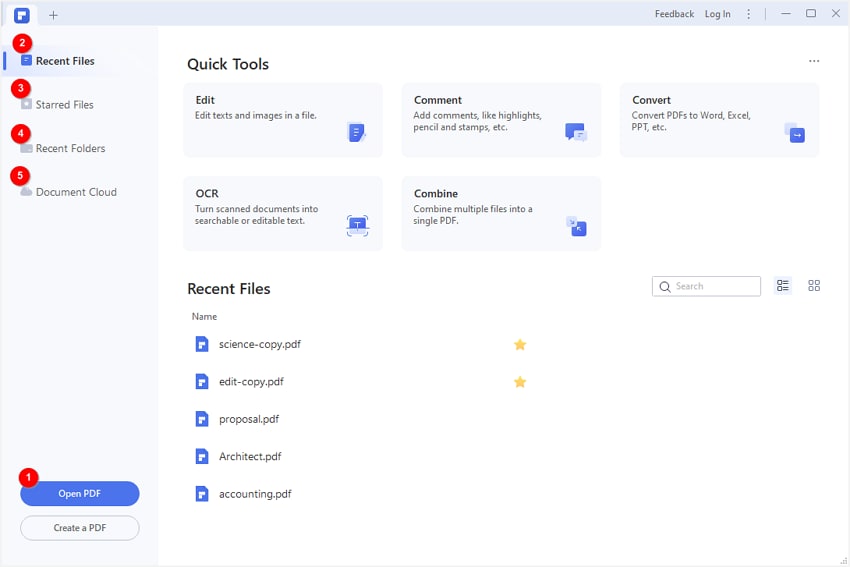 To open a PDF file, simply launch PDFelement and then use Open File or drag-drop the file into the interface.

There are a couple of ways to do this. 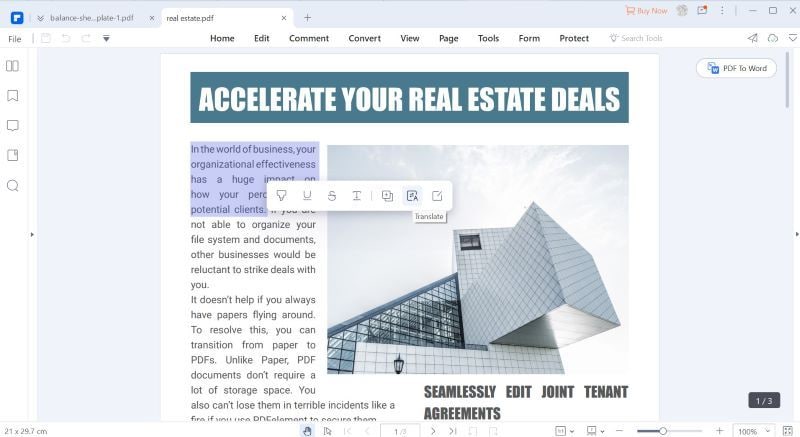 One way is to simply choose the text and then use the floating contextual toolbar to translate that bit. 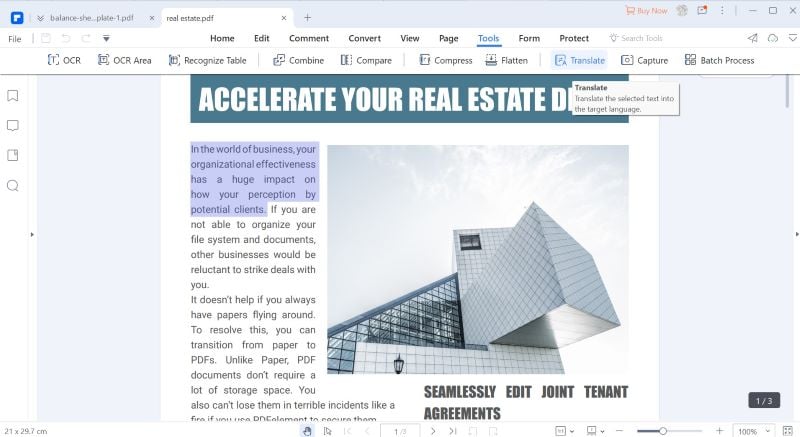 The other way is to select a block or portion of text, go to Tool, and select Translate. 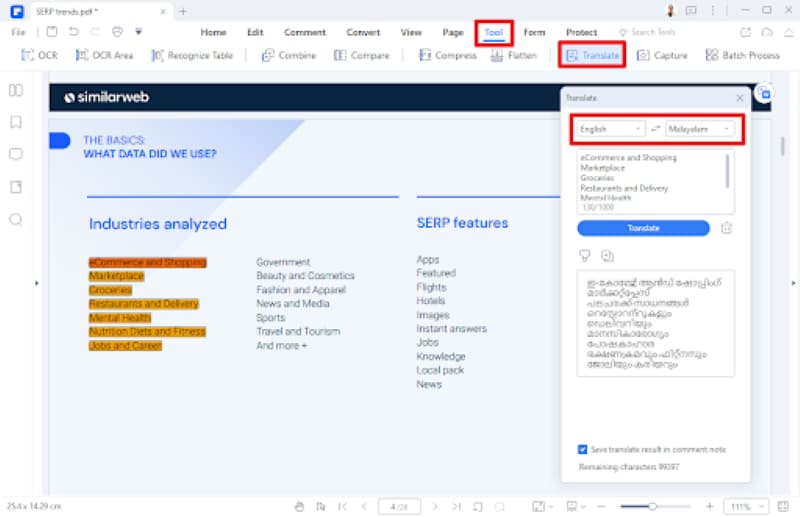 In the second method, you can directly set the language combination and direction of translation (English to Malayalam vs. Malayalam to English, for example)

You can now copy the translation and paste it into a different document such as a Word file or a PPT. There's also an option to save the translated text as a comment, which is very useful if you have lots of text bits to translate in the PDF file.

As you can see, this is a very efficient way to translate. And the best part is that the translation technology used in PDFelement is well-supported by global standards from companies such as Microsoft and iFlytek which means the translated text will be compatible with several different document formats as well as AI-based voice recognition systems. The translation service is not free but it's well worth the price because it's far cheaper than using a human translator.

Don't know how you can translate your PDF from English to Malayalam? Let us help you out. The video given below tells you all about PDFelement, the best PDF converter, editor, and translator for PDFs. Check out the link to know more.

In the following sections of the article, we'll look at some alternatives to using PDFelement. Most of these are free tools that you can download online or from a play store. Let's take a look at some of the options available to us. 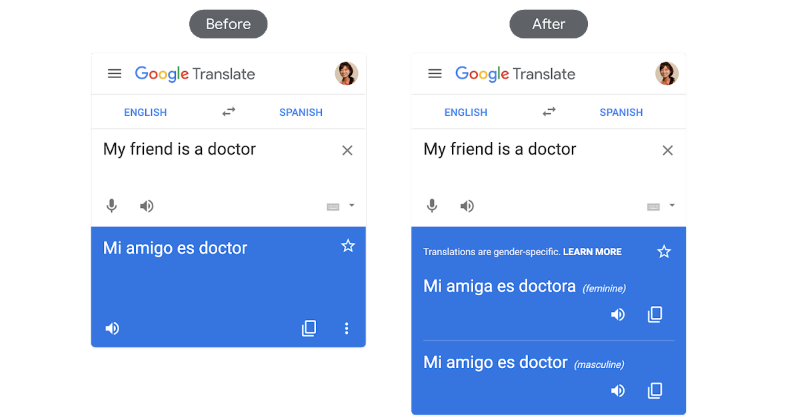 Google Translate is one of the most famous free tools for English PDF to Malayalam translation. It's simple to use and is fairly accurate. However, the accuracy is not the best as the translation is largely crowdsourced, similar to Google Maps locations. That means your text may not get translated the correct way, especially if there are nuances such as idioms, metaphors, and other unique content bits. Nevertheless, it's convenient because you don't have to install any software - just access it from any browser, preferably Google Chrome so you get the full capability of this English PDF to Malayalam translation tool.

A dictionary is obviously an essential tool for translating content. However, it's only useful if you need to quickly translate a word or short phrase. That means you'll need to have a working knowledge of your source and your target languages, with native knowledge of at least one of them. A dictionary app such as this can't really help with PDF English to Malayalam translation, but it can assist you when you're stuck finding the exact word that matches the context of the topic.

This is one of the best iOS options for translating English to Malayalam, especially when you're traveling. Actually, it's specifically designed for travelers who wish to converse with the locals while traveling in Kerala, the home state of Malayalam in India. It also helps when you're away from your desk. However, you do need to have the PDF or text content already downloaded to your mobile device for this app to work. If not, you'll need to enter the English text manually, which could lead to some errors, etc. 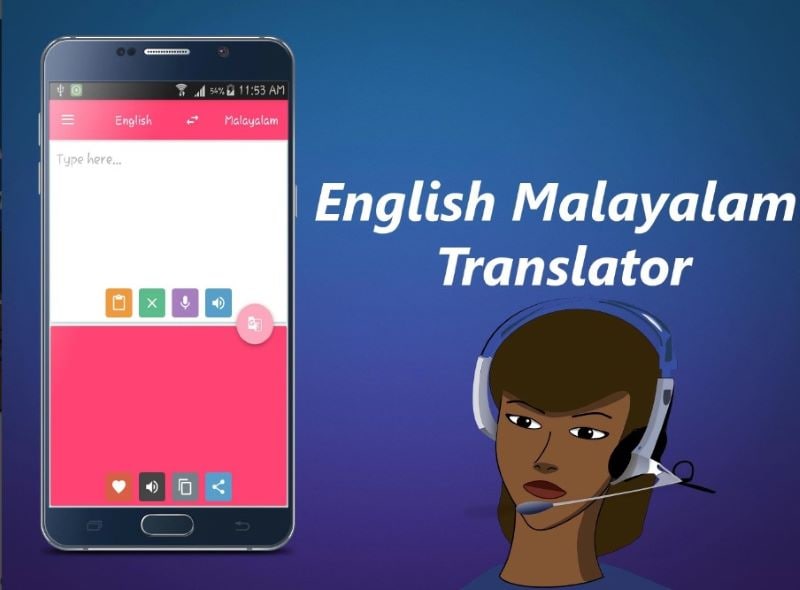 The Android equivalent of the previous app works on all Android tablets and smartphones. Similar to the other app, it's primarily a translation tool for travelers roaming "God's Own Country", as Kerala is popularly known amongst the tourist population. All you need to do is copy the PDF text you need and use that as input for the app, which will give you the translated text. It's a handy tool to translate short bits of text but, as with most of the other apps and even Google Translate, you can't translate entire PDF documents the way you can with PDFelement.

This app from Microsoft is a great tool because the company itself is one of the leaders in AI for language space. Their translator is quite accurate but, again, you can only translate a sentence or two at the most. Anything beyond that will require a more robust desktop utility. The advantage here is that it accepts various input mediums, not just text. So, you can use an audio sample, your voice, or even text on a photograph or your device camera. Again, great for travelers who need an English to Malayalam translation PDF tool on the go but not so great if you have a lot of PDF documentation that you need to translate from one language to another. 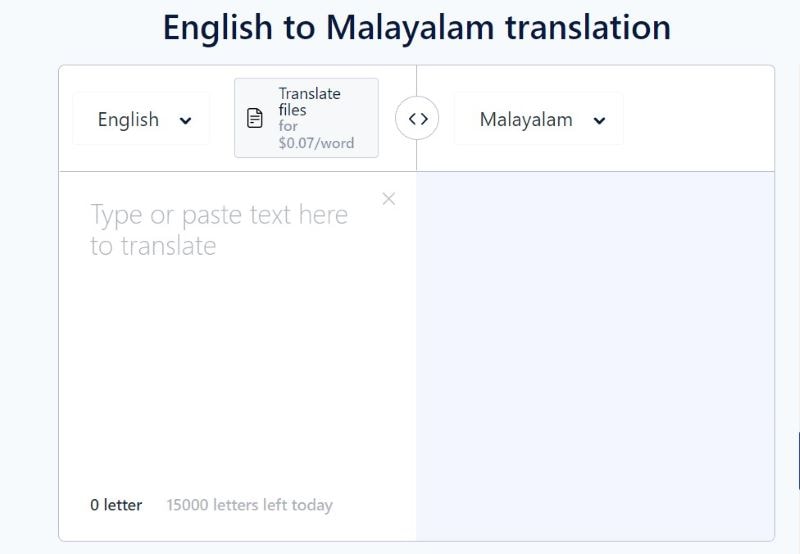 Translate.com is an online service that also provides specialized translation for paying customers who need human translation. However, the online service is free and works pretty much like Google Translate, except for the lack of extras such as a text-to-speech engine that reads out the translated text for you. It also has a cool paid feature to help translate entire files, which is great but is quite expensive at $7 per 100 words. But you do get a human translator for that price so you can expect a high level of accuracy. 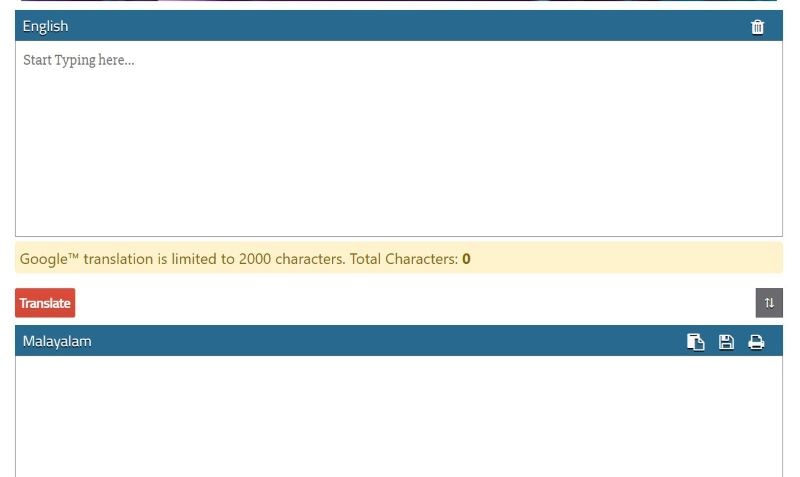 This is a multipurpose website that also offers an online English to Malayalam translator (along with other language combinations.) The difference between this and the previous online service is that this one actually uses Google Translate at the back end to handle translations, which means the limit of 2000 characters applies here as well. You just paste your text into the box provided and hit the Translate button, and Voila! Your translation is ready!

You now have a working knowledge of the best English to Malayalam translation PDF tools available to users of different types. Whether you need to translate a full document, just a paragraph, or even a single word, you can use this article as a guide to lead you to the right resource. That being said, accuracy is often a very important aspect of English to Malayalam translation, especially when it comes to medical, legal, and other professional documents. That's why PDFelement comes highly recommended because everything is done right on your PC, which is the most secure and private option for serious translation.