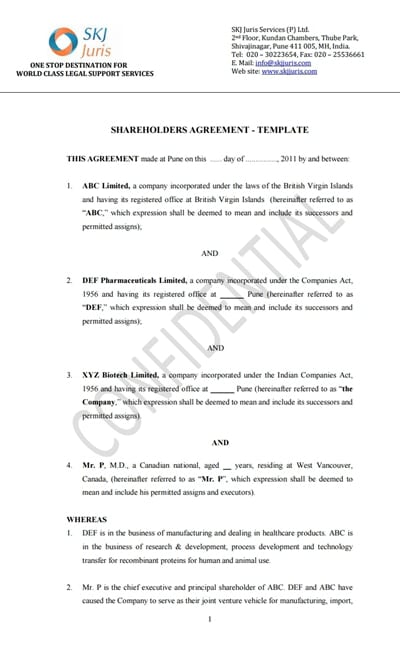 How to Edit Shareholder Agreement Template

When creating a shareholder agreement, here are some of the points that have to be followed:

1. Select all the issues to be covered in the agreement. It’s not necessary to plan for each prospect but it is important that the shareholder agreement include a framework of company law.

2. State the interests of shareholders. Shareholders invest in a company for a lot of reasons. The agreement has to identify the interests of every party before enlisting the agreement. The most common reason is to benefit financially from the worth of the growing company, but there could be others that are similar or more significant to different individuals.

3. Identify the value of the shareholder. The assessment of a company is extremely subjective. There are many ways to assess the value of a company, but it’s not easy and essential to put a fixed value on a company. Even the worth in the accounts is derived from personal opinions made by the accountant.

5. Decide on how the voting power of shareholders has to add up. Usually, one share "buys" a vote. The shareholder that has over 50% of the shares is able to make decisions and controls over the company, whole for some decisions, holders that have more than 75% of the shares have to agree.

Following the steps stated above is going to help you in writing a much better shareholder agreement. Depending on the seriousness of the agreement, it can’t be stressed enough how important the last step is. There are a lot of writing tools you can get online for your grammar, punctuation, and spell check solution.

What is Shareholder Agreement Template

This offers solutions to problems that are possible to happen and produce conflict among the shareholders of the company. Without a great shareholder agreement, a business is vulnerable to unanticipated things. The time the company is going to spend on defining the business relationships is an asset in the constancy of the future of a business.

The shareholders of a company are the ones to determine what should be included in the Shareholders Agreement of the company. The kinds of clauses that a company has to consider are going to depend on many different factors, this includes the type of business the company is going to set up, the number of shareholders, and the company’s main goal.

Listed below are some of the most common types of clauses that are included in the Shareholders Agreements.

1. Supplying and transferring shares – This should include the provisions to stop unsolicited third parties from obtaining shares and how a shareholder is able to sell shares.

2. Offering some protection to shareholders of below 50% of the shares – This includes getting particular decisions to be settled by every shareholder.

3. Managing the company – This includes appointing, paying directors, making a decision on the business of the company, making big capital expenses, giving management details to shareholders, banking arrangements, and funding the company.

1. Make sure that you protect your concerns regarding the business relationship.

A lot of companies don’t have a shareholders agreement and include operational information in their courses of association. But the articles of association have to be filed at Companies House and therefore their contents are openly available.

It might seem odd since the company has just been started and it already includes an exit clause. But by getting ready for these possibilities, it makes shareholders talk about their visions for the future. Any disparities each panel might have could also be resolved, thus limiting the possibility for disagreements in the future.