When it comes to choosing the most suitable file format for Kindle, one can easily get lost at sea. Kindle does support a wide range of file formats. These include .DOC, .DOCX, HTML, TXT, PDF, and lots more. But among these, PDF is one of the least apt. Most PDF files come in a fixed width which is larger than the screen size of Kindle devices. This disparity can convolute the display of a PDF file on the device screen.

The Kindle Direct Publishing (KDP) platform converts any file uploaded by users in any of the Kindle formats into a mobi file before storing it on Amazon's servers. There are three main versions of mobi Kindle files: the "KF7" mobi, which is suited to older Kindle devices; the "KF8" mobi, suited to modern models like the Fire and Fire HDX, and the basic mobi, which is an intermediary of the KF7 and KF8.

However, these mobi file formats are not the final file formats for end users. The final, encrypted format is the AZW and AZW3. These are the only formats for all books listed on the Amazon store. But there's hardly any user who can create well-formatted AZW or AZW3 files, and anyone who does so will only get to use them in a very limited way, as AZW or AZW3 files cannot be uploaded and published at the KDP.

However, since the mobi format comes closest to being the most optimized format for end users, PDF-to-mobi converter apps can be of great import. But most PDF-to-other-Kindle-format converter apps distort the layout of converted files. They may churn out files that are full of word-warps and convoluted paragraphs. These drawbacks are deterring to people who wish to automate the direct conversion of PDF files to other Kindle formats. A relatively expensive solution is to hire data conversion experts who use their expertise to manually prosecute the conversion.

Nonetheless, the following apps are the best performing apps when it comes to PDF-to-Kindle file converter apps: 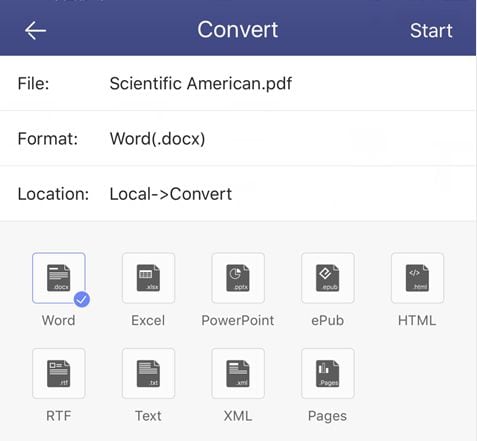 PDFelement for iOS is one of the most veritable PDF-to-Kindle file converter apps on iPhone and iPad. With its PDF creator, converter and editor functionalities, it is one of the best apps for people who're just getting to learn how to transfer PDF to Kindle using apps. It comes with a plethora of great features that make it an excellent app that adds PDF to Kindle. These features include functions for marking up PDFs, filling PDF forms, signing PDF documents.It can run on multiple operating systems, including Windows and MacOS X. Its splendid OCR features on desktop support 25 languages. 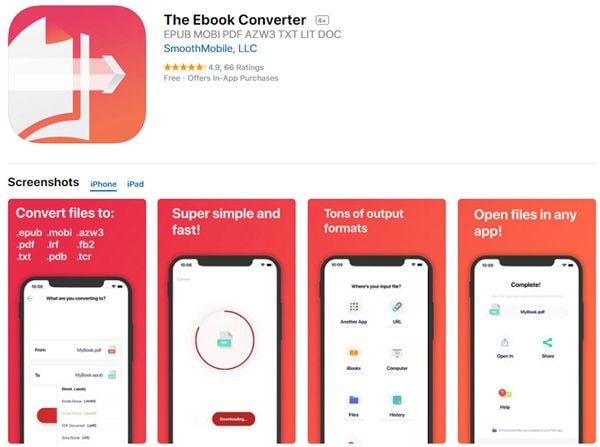 The range of file formats which the Ebook Converter converts PDF into is undoubtedly impressive. This includes EPUB, mobi, .DOCX, TXT, LRF and lots more. Users can store converted files in the in-app file browser or in the files app of their devices, and can also transfer the converted files between multiple devices via iTunes File Sharing. They can also open converted files with several other apps.

However, the app cannot run without an active internet connection. The app executes file conversions on a secure cloud server in no more than 15 seconds. But while the clouds-based conversion modality makes for greater speed and efficiency, it can infringe upon user privacy, hence the app requires users to explicitly consent to the transfer of files to the app's conversion server. Once the conversion is executed, every trace of the converted file gets automatically erased completely from the server. 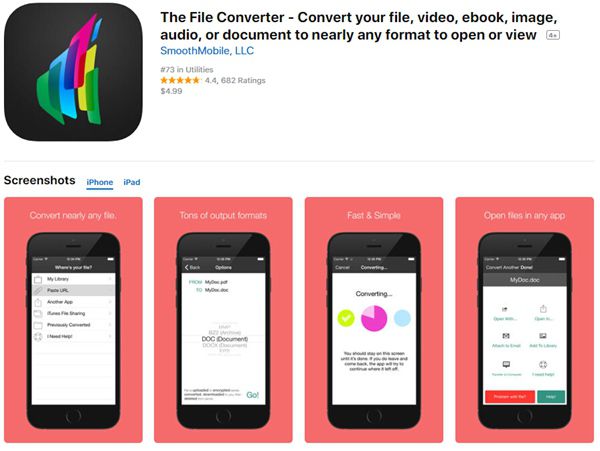 Not only is this an excellent PDF to text app, it is also a great file converter that converts videos, audio, and images into almost any format, including 3GP, 3G2, MP4, AVI, WAV, AAC, MMF, MPEG-2, and lots more. The app also converts PDF to a host of other Kindle apps, including DOCX, EPUB, mobi, midi, LRF, LIT, etc.

Converted files are automatically stored in the in-app file browser, and can be opened and previewed with other apps. Users can also share converted files via iTunes File Sharing.

But the device must have an active internet connection in order for the app to run on it, because the app carries out file conversions on a secure server over the internet. This cloud-based file conversion protocol makes for greater conversion speed, so users can convert files without breaking a sweat. However, to ensure that the user's privacy is not compromised, the app requires that users fully consent to the transfer of files to the conversion server.

Conclusion: For people who always need to add PDF to Kindle using apps, the aforementioned apps can provide a way around the drawbacks that mar the efficiency of other PDF to Kindle apps. Due to their rudimentary hardware configuration, Kindles are primarily designed to run small-size, low quality files. So, although it supports PDF, Kindle does not actually handle PDF files.