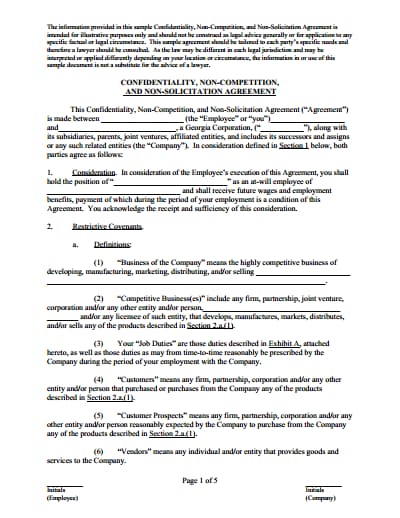 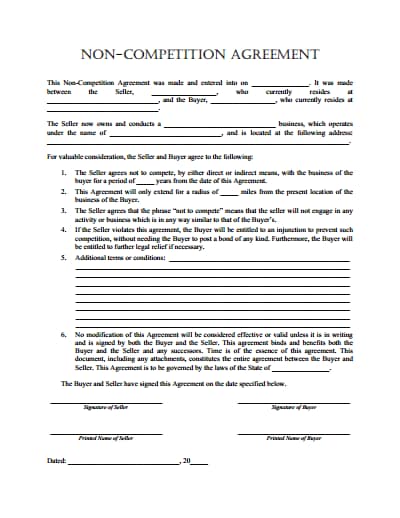 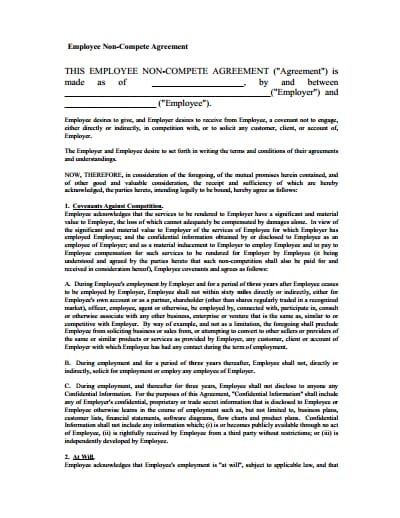 How to Edit Non-Compete Agreement Template


What is A Non-Compete Agreement

A Non-Compete Agreement is a contract where one party agrees not to compete with the other party from the contract for a determined period of time. In most cases, it is a part of the agreement between employer and employee and it can be signed before then the employee starts to work or at the end of a business relationship. This contract can also be a part of the business deal between partners in some job. It ensures that a gained knowledge will not be used for competing in the future. In exchange for that, the first party usually pays a fee.

Like any legal document, a non-compete agreement must contain certain elements to be valid.

Step 1 First, both parties from the contract must be clearly stated with their names, addresses and other important data. If one or both parties are a company, it should also include data about the person which is signing the agreement in the name of the company.

Step 2 The reason for creating this agreement must be stated. It should include conditions which have to be fulfilled and the period in which this should apply. Of course, this conditions and period should be reasonable.

Step 3 If necessary, it can also include a geographic area for this agreement, like state, distance from the named location, or even a detailed geographic location.

Step 4 The amount of the compensation for a noncompeting party should be included in this agreement. In some cases, like when this contract is signed before then the employee starts to work, there is no need for a compensation.


How to Create a Non-Compete Agreement

Creating a Non-Compete Agreement is not complicated, but it requires some basic knowledge and some data which will be incorporated into the agreement.

Step 1 Start the template by placing the valid date on the top of the page.

Step 2 State both parties with all the important data, such as names and addresses. If there is a person that will sign a contract in the name of the company, write down its data as well.

Step 3 Write down the reason for creating this agreement. Be specific what the subject of the agreement is and what behavior is not allowed.

Step 4 State the time period in which this agreement will be valid. This part depends on many factors. For example, if your company is in a fast developing business, there is no need for this agreement to be valid for few years. In some cases, even 6 months is enough.

Step 5 State the geographic area where this agreement applies. Geographic area can be determined in different ways. For example, you can agree that a former employee is not allowed to work in the same state, in a certain region or on a certain distance from the location where your firm is located.

Step 6 Write down the money compensation agreed for this agreement. In some cases, like if this agreement is a part of the job offer and it is signed before the employee start to work, there is no need for this part, but in most cases it should be included.

Step 7 No matter what agreement we talk about, it is always a good idea to implement a paragraph about possible disputes and ways of solving them.

Step 8 Finally, on the bottom of the document place lines for the date and signs. Make sure to leave plenty of space for it.

Step 9 Create at least two copies of the agreement, one of each party.


More Tips about the Non-Compete Agreement

1. Think well before then you start writing a non-compete agreement. Make sure to include all the important elements, but be reasonable with your requests. There is no need to forbid someone to work in the whole state if your business is locally orientated.

2. Talk with the other party about everything and find a solution which will satisfy both of you.

3. If you are looking for a new employee, you may consider signing this agreement as a part of the new job contract, if you think it is necessary. It can save you a lot of time, money and nerves.

4. Read everything well before you sign and let the other party do the same. Be fair and reasonable and there should be no problems.